I probably read too many food blogs, magazines and cookbooks, because every day I see delicious recipes that I have no time to make. Just last week I bookmarked these decadent orange rolls and I wanted to make them right away. But once I sat down and really read the recipe, the three cups of confectioner’s sugar and over two sticks of butter scared me off a little. It’s not that I didn’t think they would be delicious, it’s just that I went to the freezer and realized that we were on the last pound of the four-pound pack of butter from Costco that we bought at Easter. Wasn’t Easter just a little more than a week ago? Just where did all that butter go?

But I couldn’t get those orange rolls off my mind. After a little browsing through the archives of Artisan Bread in Five, I decided to make a batch of no-knead challah dough, and then turn that into orange rolls. Granted, I still used two sticks of butter, but since I only used half of the dough…well, you do the math. There wasn’t too much effort involved (five minutes here, ten minutes there–maybe 30 minutes total), and the results were spectacular. SPECTACULAR, I tell you. Tender, fluffy and gooey, with a distinct orange perfume. I still have the other half of the challah dough, and I’m sorely tempted to make another pan of orange rolls. Instead I’ll try to be practical and make little ham and cheese buns–something to pop into lunch boxes.

You, however, should go make orange rolls immediately. You can either make a whole batch of challah dough (four pounds) and use half for the orange rolls, or cut the dough recipe in half and use all of it. If you don’t have enough people around to eat a whole pan of orange rolls, freeze the extra baked rolls individually (well-wrapped) and enjoy them whenever. They reheat very nicely. 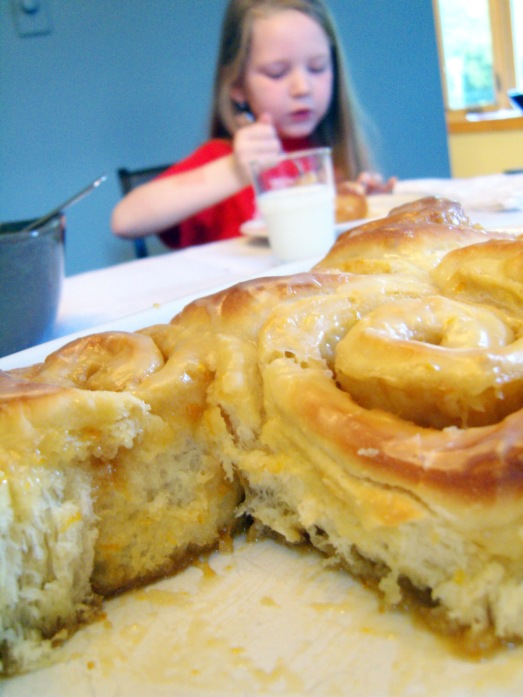 1/2 batch of no-knead challah dough (about 2 lbs. of dough–ignore the topping)

The day before you want to serve the orange rolls, mix up the challah dough and let it rise for 2 hours at room temperature. Refrigerate the dough. Before you go to bed, sprinkle plenty of flour on the top of the cold dough and scoop out half–or all of it if you only made half a batch–onto a well-floured silicone mat. Roll the dough out into a 10″x18″ rectangle, or about the size of the silicone mat. Let it rest while you mix the orange zest, butter, brown sugar and vanilla together in a small bowl. Spread the mixture onto the dough all the way to the edges. Roll the dough into a log from the longer side, lifting the silicone mat to help push it along (like rolling sushi). Cut the log into 12 equal slices with a piece of dental floss, and place each roll into a well-greased 9″x13″ baking pan. Cover tightly with plastic wrap and refrigerate overnight.

In the morning, heat the oven to 350 degrees. Remove the pan from the refrigerator and let rest for at least 20 minutes on top of the warming oven. Bake the rolls, uncovered, for 30-40 minutes, or until a deep golden brown.

While the rolls bake, mix up the glaze. Whisk the orange juice, confectioner’s sugar and vanilla together in a small bowl. Let the rolls cool slightly (5-10 minutes), and then spoon the glaze over the top. Serve warm.