It’s taken a couple months, but I finally completed another project on my list. 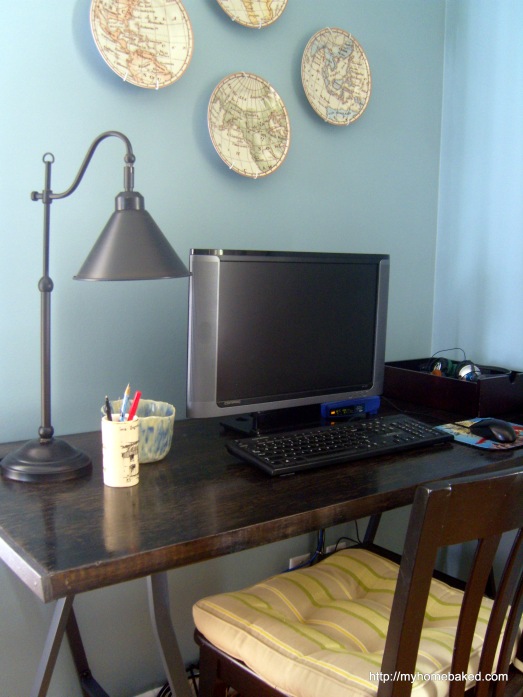 We had our desktop computer, the one the kids use the most, in a small computer armoire in the living room. I had come to loathe it. The doors didn’t latch properly anymore, the keyboard tray glides had lost all their ball bearings, dust and trash collected behind the monitor, and the extra storage cubbies just stored things that we forgot about and obviously didn’t need (old holiday cards, obsolete computer software, empty printer cartridges…). And if someone actually needed to do some work at the computer (it does happen once in a while), there was no desk surface on which to spread books and materials.

I wanted a new desk, very simple, with no drawers or cubbies that could collect junk. Being me, I didn’t want to spend much money. Also, I have a garage full of old hollow core closet doors just waiting for a project. 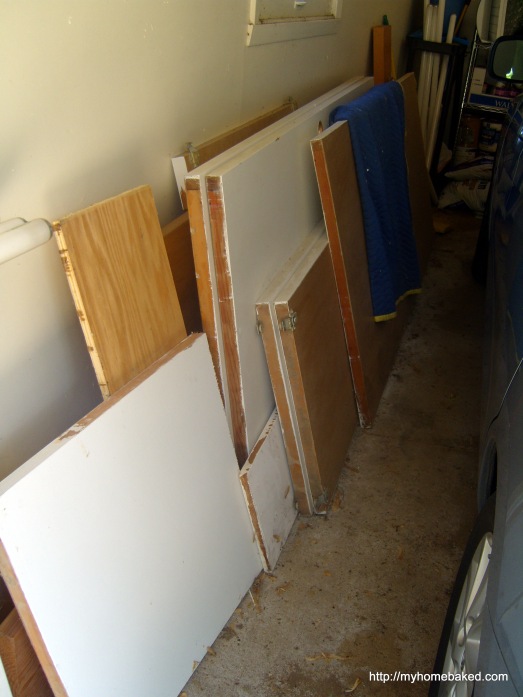 I did buy some trestle legs from Ikea, but that was my only investment. I chose one of the narrower doors in my stash and used some Citri-Strip gel to remove the paint from the side edges. Then I used my jigsaw to cut the door to the length that would fit between the wall and the window in the living room corner. I had to use a little wood filler where the veneer started to chip off. 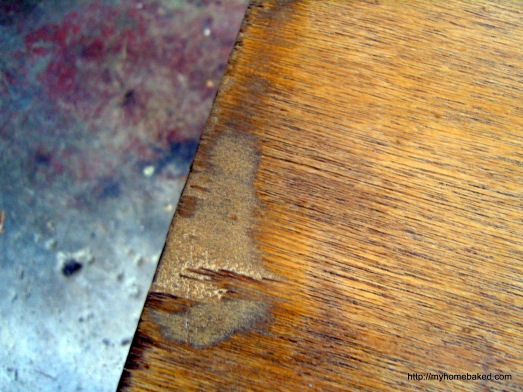 I sanded the whole thing and applied two coats of Minwax Wood Finish in Ebony. When it was dry, I coated the door in paste wax and buffed it until it was shiny.

But remember–this was a hollow core door, so when I shortened it, I lost the finished edge on one end. The other end wasn’t looking too great, either. I scrounged up a couple of 1″ x 2″ pieces of primed MDF in the garage left from some other project and spray painted them with some oil-rubbed bronze. I was just lucky that the color matched the stain really well. I nailed the pieces as best I could to the ends of the door, and that was that.

This is no polished piece of carpentry. 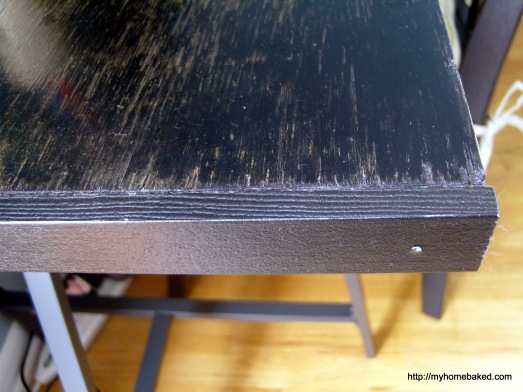 But you know what? I don’t mind. From a distance, it looks nice. “Like it came from West Elm!” cheered the Hub. (You can see why I keep him around.) A box to store the kids’ headphones (essential so that I don’t have to listen to Minecraft sound effects, episodes of iCarly, or Curious George games) and a pencil cup is all the storage we need. I was going to hang a small memo board to post computer-related reminders (user names and URLs), but I might just keep a little notebook in the box instead. 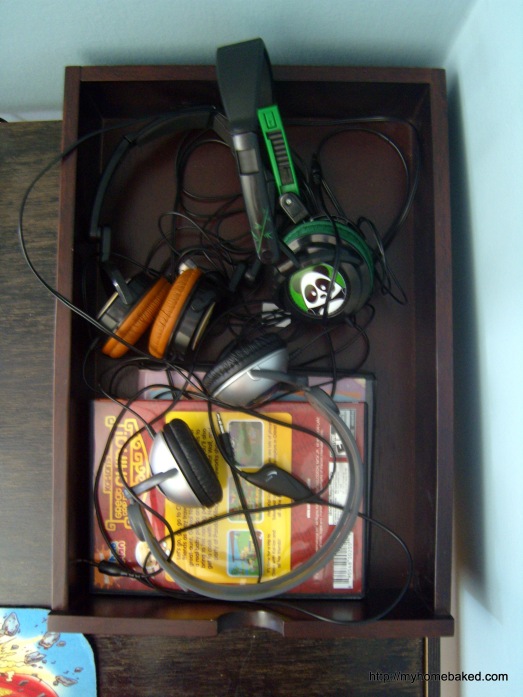 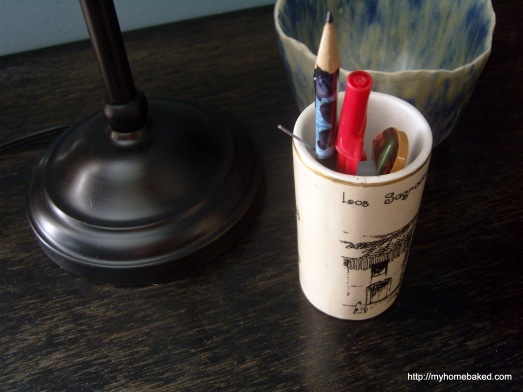 The one problem I haven’t solved is cord wrangling. I suppose I could do a better job of tidying up the extra lengths of cable and power cords. I’ve seen a few people hide the power strip and modem in a decorative box, but somehow that seems like a fire hazard to me. 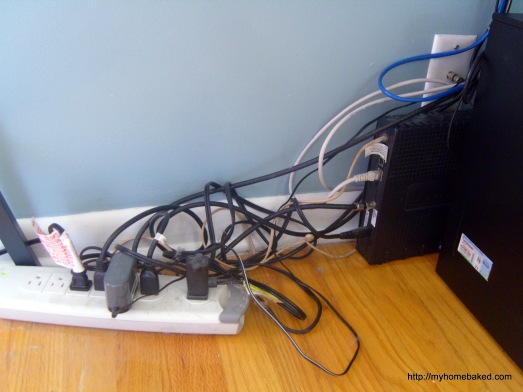 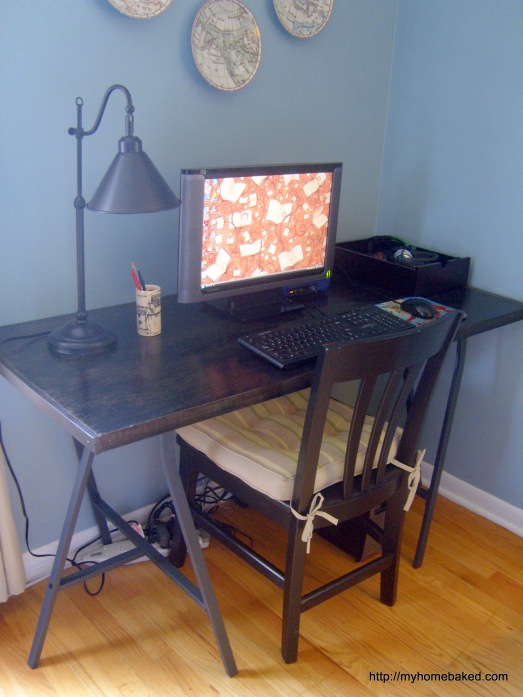 I’ve already noticed that it’s easier for two kids to pull up chairs and play together. (Mr. Ten has been giving Miss Seven lessons in Minecraft.) It’s been three days, and the area has stayed nice and tidy. I even found a spot to hang my map plates that wouldn’t fit in the dining room. And if the new desktop doesn’t withstand the abuse it’s sure to suffer, at least I didn’t spend any money on it. 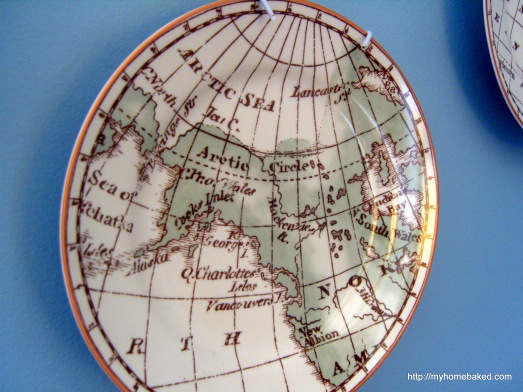 What would you make with old door?