Thirty minutes alone in the library, and look what treasures I brought home! Our local library is a wonderful place, and never more so than on Tuesday mornings when they have “On Our Own” story time for three-year-olds. That means you slap a nametag on your child and hand him off to a smiling librarian to join in stories, singing and stickers while you dash downstairs to indulge in half an hour of quiet time ALONE in the adult section.

I haven’t had a chance to crack all of these books yet, but I managed a couple chapters of Molly Wizenberg’s A Homemade Life, and already found half a dozen recipes to try in Melissa Clark’s In the Kitchen with A Good Appetite. Without even getting through the table of contents, I stopped at “Whole Wheat Cinnamon Snacking Cake” and got to work. I confess, I may have had visions of cheerful, well-mannered children snacking on cake while willingly doing their homework. A good recipe is more than a set of instructions, after all. It’s an attempt to turn an abstract vision into something concrete, something you can taste. 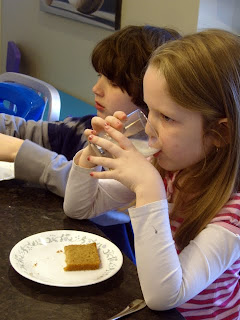 This recipe was true to its promise. Tempers were soothed, arguments forgotten, all at the mere mention of cake. And it provided enough fuel to draw pictures and write sentences (in our best kindergarten spelling!) about red-eyed tree frogs and mango-eating orangutans, and finish molding a peninsula out of floral foam for that second grade social studies project.

I am happy to eat a cake like this unadorned–the nutty whole wheat flavor and subtle cinnamon go nicely with a cup of tea–but the recipe also suggests a variation with streusel, turning it into more of a coffee cake. That sounds good, too, doesn’t it?

The recipe calls for yogurt, but the cake is richer than other yogurt cakes I’ve tried, thanks to the addition of three eggs and some melted butter. I didn’t make a single change to the recipe, so I don’t feel comfortable copying it here outright. I suggest you request In the Kitchen with Good Appetite from your own library, and see what other recipes sound good to you. I already tried the Pan-Roasted Asparagus (topped with garlicky breadcrumbs and a fried egg)….mmmmmm. We had it for dinner, but wouldn’t that be good for brunch?

(Due to a sinus infection that just won’t quit–though I think the antibiotics are finally doing their job–I started this post over a week ago and only now managed to complete it! In the meantime, I’ve made several other tasty things I hope to share with you. Orange Upside-Down Gingerbread, anyone? You’ll have to make it yourself–we ate it all up!)