Spring break. We haven’t jetted off to warmer climes. We’ve enjoyed a visit from the grandparents, gone to the zoo, the library and the swimming pool at the Y. We’ve stayed in our jammies until noon (or later). I finished one book and started another, and slept until 8:30 a.m. two days in a row.

In an attempt to be productive, I got so far as making a list of possible projects. It’s Friday, and I’ve only crossed two items off the list, one simply because the weather isn’t cooperating. (Can’t rake leaves when the yard is under several inches of water. April showers bring May flowers…) This morning I cleaned the kitchen, not because it was on the list, but because I couldn’t take the smudges on the new dishwasher anymore. One thing led to another, and pretty soon I was scrubbing the sticky coating of dust off the knife block. 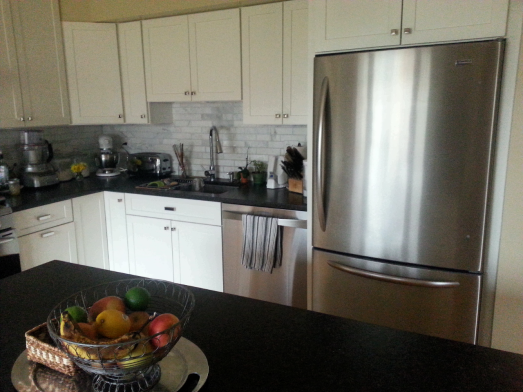 Miss Eight has busied herself all week with duct tape crafts. Mr. Eleven has clocked too many hours on his iPod, watching YouTube videos and texting his friends. Today he was finally able to ride his scooter over to a friend’s house. Little Six has polished his piano recital piece (I never saw a kid so fond of the metronome), played a lot of sword fighting on the Wii, and finally unearthed his marble run.

Since I won’t be doing any laundry today (when the ejector pumps are working so hard to keep the rainwater out of our basement, I don’t like to overtax them), I should probably make good on my promise to Miss Eight to get the first coat of paint on her nightstand. I did finish one other project: cleaning out the hall closet.

It’s probably tempting fate, but I put away the snow gear and got out the rain gear. (Tip of the day: You can shine your plastic rain boots with Armor All!) If I don’t accomplish anything else, that at least will make Monday morning’s return to school a little easier.

You might think that these lazy days at home would lead to more exciting cooking. Though we did cook quite a lot while the in-laws were here (see the nice birthday cake the Hub baked for his mother?), the Hub is working a regular schedule this week and I am not very motivated. I’ve resorted to easy fall-back meals: pasta pesto, hamburgers and roasted potatoes, pizza (the dough was in the freezer), and leftovers.

Recognizing that we’ll be back to the routine in a few short days, I did make next week’s menu and baked some extra pancake batter into these Pancake Mini-Muffins for school morning breakfasts. Now it’s time to roll out that pizza dough…