Our basement is nothing to get excited about. It’s unfinished, though someone slapped up some dark paneling at some point (in the ’80s, maybe). Not long after we moved in (in reality, not long after we unpacked the last box–probably a year after moving day), my husband painted all the paneling. We laid some rugs down, stashed the noisy toys down there, and let the kids play. Unfortunately, they didn’t play down there very often, preferring to be upstairs with Mom and Dad.

Now all the kids are old enough to play unsupervised in the basement (especially when they have friends over and are reenacting Pokémon battles or shooting Nerf guns), but it’s often too messy, and the many florescent lightbulbs are always burning out. Along with the garage, the basement is always the staging area/dumping ground for all the stuff we don’t want in the rest of the house. After Christmas and clearing out the kids’ rooms, the piles had toppled into one another and all but blocked the path from one side of the basement to the other. Empty boxes, suitcases, bins and bags of outgrown toys and clothes… 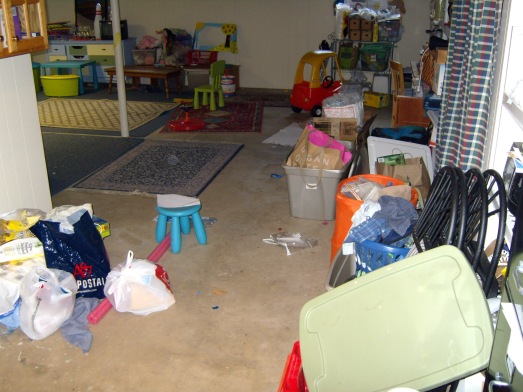 Halfway through the process…I found the floor before I remembered the camera.

For me, one of the easiest motivators to get clutter out of the house is to have a deadline. Wednesday the Amvets truck was scheduled to do a pick up, so I had to have everything boxed up and on the porch by 7 a.m. (Someone calls me about once a month to ask if I have anything to donate. If I do, they send me a reminder postcard and call the day before. No loading up the van, no carting things to Goodwill. I just leave it on the porch for the truck and they leave a receipt.) Over the weekend I listed several items on Freecycle–mostly items that were generously given to us: a toy box, a toddler bed rail, multiple bags of toddler board books–and all were picked up. I found a new home for the train table, which I will deliver tomorrow.

Again, only about half of what I donated.

I filled a bin with recycling (mostly empty boxes left from Christmas), put away the luggage, sorted and stored all the hand-me-down clothing for Little Four to grow into. While I was at it, I sorted the laundry and washed a couple loads. I reduced the clutter pile to a single box of stuff that still needs sorting.

There’s that final bin, waiting patiently to be emptied. It may take a while.

I’m proud to say that there’s a large swath of floor that is completely clear. It’s an ugly concrete floor, and perhaps one of these days we’ll get around to painting it. In the meantime, I need to reconsider what is on the basement shelving. I need to find a better container for the gift wrapping supplies. I have a big stack of empty plastic Ikea bins that might be useful in organizing the stuff on those shelves. My sewing area needs some work, and there are several boxes of old photos, sheet music, and kitchen supplies that need purging. Now that I can actually get to those things without climbing over a mountain of junk, I only have one excuse left.

It’s not beautiful, but there’s nothing to trip over. And the laundry bin is empty!