The best thing about the William Morris Project is the motivation. I had planned to work on a project yesterday, but when I went to the basement to throw in a load of laundry, I discovered water on the laundry room floor, puddling under the furnace. After some investigation with a flashlight to determine where the water might be coming from, I called the HVAC repair service and they found a leak in the humidifier as well as a leak in the furnace flue. Needless to say, there went my morning and $200.

So I had no post ready for this morning, and I wasn’t exactly raring to go after I sent everyone off to school. But then I read Jules’ post about organizing her recipe files (I so need to do that), and Tiffany’s post about organizing her spice cabinet, and I decided I wasn’t going to be left behind. I raced through the shower, got a second cup of coffee, and got to work.

When we remodeled our kitchen a couple of years ago, we had this 12-inch space for a cabinet next to the stove, and decided it was too narrow to store anything useful in a standard cabinet. A pull-out spice cabinet just fit in that space, and we certainly needed storage for spices. 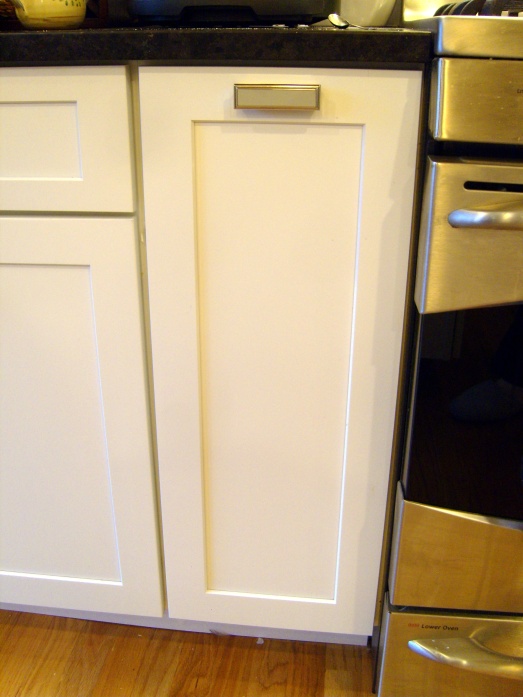 It seemed a perfect solution, until it was actually installed and I tried to put the spices in it. There were too many shelves, and there wasn’t enough space for the taller containers. You can’t pull the cabinet out more than halfway (this may be adjustable, but so far I can’t figure out how), so it’s hard to see and reach anything in the back. I tried several times to remove one of the shelves, but couldn’t maneuver it out of the tight space. So we’ve just tossed things in and rummaged around, and while I could usually find what I wanted, it drove my husband crazy. Crazy. I found him grating a cinnamon stick into his cappuccino the other day because he couldn’t find the ground cinnamon. For Christmas he gave me a pack of spice labels (to be fair, I love practical gifts). Subtle, no?

Step 1: Empty the cabinet. Yikes. Look at that, I needed an aerial shot.

Step 2: Remove that annoying extra shelf. No photos here, but it involved some pliers, a hammer, and divine intervention.

Step 4: Wipe off the shelves and put spices back in some kind of order. I put the most-used on the top shelf (garlic cellar, salts and peppers, and spices I tend to reach for several times a week). The second and third shelves have spices we don’t use as often. I grouped the baking spices together so they’re easier to reach for. In the past, I’ve attempted to alphabetize the spices, but I’ve learned that it’s silly to have cream of tartar front and center when I only use it a few times a year.

It would be nice to have all the same kind of containers, but it wouldn’t be as practical as it sounds. We use some spices in larger quantities and go through them quickly, so the large containers make sense for those. Some things just go stale if we have them in bulk, and some are too expensive to buy more than an ounce at a time. As long as everything is clearly labeled, I’m happy. I’m hoping the other cook in the house will express his joy in the form of a fabulous meal this weekend. 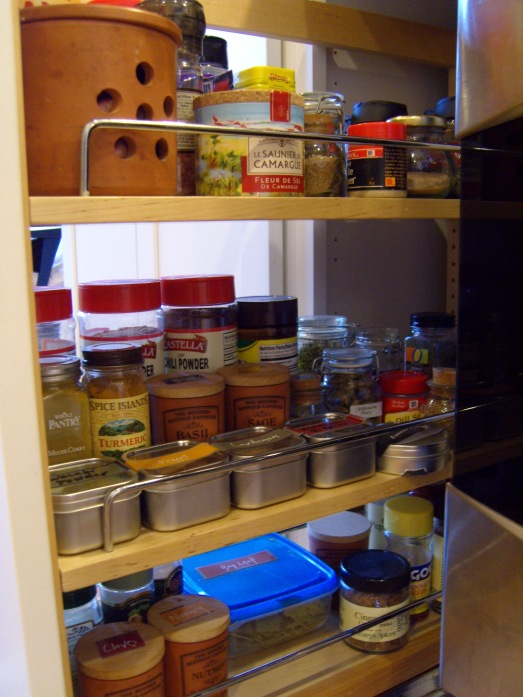