It was Father’s Day, and the father of my children had wisely packed up his library book and taken the oldest two to the pool, while I stayed home with He-Who-Will-Not-Nap. It was humid and cloudy, and 80-some degrees, both in and outside the house. The air conditioning had died. And there I was in the kitchen, with all the windows open and the oven set to 400 degrees, baking a blueberry pie.

Despite the heat, there’s something to be said for listening to the cardinals and sparrows calling from the backyard while rolling out a pie crust, as if time has stood still for fifty years or so. I could hear lawnmowers buzzing and a baby crying in the distance. My baby doesn’t cry like that anymore–time does rush on. He was singing from his bed, with wooden trains, teddy bears, books and an assortment of dollhouse furniture scattered about him. And then he crept down the stairs, finally appearing in the kitchen to announce, “I waked up! And I need a snack.” 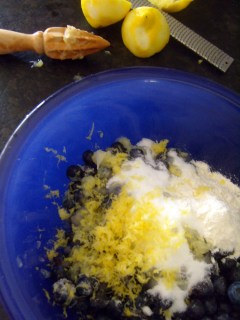 That evening we celebrated with grilled steak, creamed spinach, and blueberry pie with ice cream. We ate our pie outside on the patio to catch the breeze. Mmmmm…summer. You’re not going to get such a pie in any other season. The blueberries were juicy and jammy all at once, the crust buttery and flaky, but sturdy enough to stand up to the warm fruit filling.

I first made this discovery a month or so ago, when I made a quiche for a weeknight dinner. The crust was puffed and layered, reminiscent of puff pastry, but without all the work. I hadn’t done anything complicated or magical. I used cold butter, ice water, unbleached flour and a pinch of salt. I chilled the dough for at least 30 minutes before rolling it out. No time in the freezer, no vinegar or vodka or shortening in the recipe. Maybe you have more restraint than I do with the pulse button on the food processor. If not, try it by hand. I figure the time I spend mixing is saved by not having to wash all the nooks and crannies in the Cuisinart bowl!

All-butter pie crust (but abandon your food processor and mix it by hand!)
heavy cream 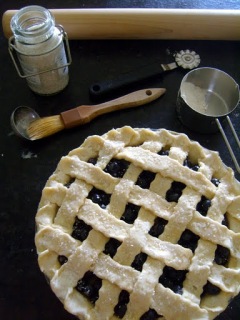 Prepare pie crust and chill the disks of dough for at least 30 minutes. Rinse and drain blueberries, then combine with sugar, flour, lemon juice and lemon peel. Crush a few blueberries with the back of a spoon and mix with the rest of the berries. Let stand for about 15 minutes.

Place the oven rack in the lower third of the oven and heat to 400 degrees. Roll out the chilled dough into two 12-inch rounds. Transfer one to a 9-inch glass pie dish. Spoon the filling into the crust. Cut the second round into 1/2-inch wide strips and arrange in a lattice on top of the filling. Press the strips into the edges of the bottom crust, trim the overhanging dough, and crimp the edges decoratively. Brush the crust lightly with heavy cream. Sprinkle on a little sparkling sugar, if desired.

Place the pie on a rimmed baking sheet and bake for 40 minutes. Cover the the edge of the crust with aluminum foil or a pie crust shield. Bake another 15-20 minutes, until the filling is bubbling in the center and the crust is golden on top and bottom. Cool pie on rack at least 2 hours. Serve with vanilla ice cream.

What dessert says summer to you? 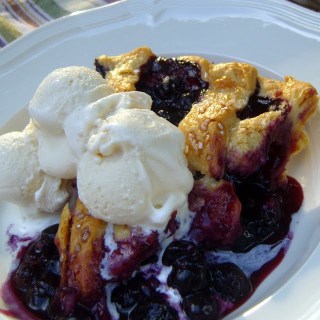