Remember that extra pie dough waiting in my fridge?  I used it to make these little mushroom pasties, turnovers, empanadas–whatever you call ’ems.  I thought I was going to make mini quiches, but then I looked at my mini muffin tins.  Sometime last year we used them to make swirly rainbow crayons with all our broken crayons, and I haven’t been able to get all the wax off the muffin tins since then.  Not a problem if you’re using cupcake liners, but otherwise…

I finally remembered an old cookbook about appetizers sitting on our kitchen shelf. I found and adapted this little recipe for the mushroom filling.  Saute chopped scallions and mushrooms in a little butter until the liquid has evaporated.  Stir in a pinch of mustard, a tablespoon of flour, then a splash of wine and a splash of cream.  Cook a minute or so, until thickened.  Next time I will add some chopped garlic and thyme. But you could fill these with anything, savory or sweet.  What about a cube of sharp cheddar and a little bit of shaved ham?
The first step was to take the dough out of the fridge and let it warm up enough to roll.  I cooked up the mushroom filling, transferred it to a bowl, and put the bowl into the freezer to cool the filling.  Then I rolled out the dough. 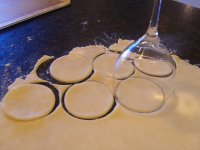 A few tricks for the dough.  It’s better if it’s cold (but not so hard that it won’t roll, obviously).  Try not to over work the dough.  And don’t go crazy with the flour.  I turn the dough after every few passes with the rolling pin, and if anything is sticking, I dust that area with a little flour.  I usually roll out my dough between sheets of wax paper, but as you can see, I ran out and had to make do without.  I also love the maple rolling pin my husband gave me several years ago.  Any praise I might give it comes out sounding like a racy metaphor, so let’s just say it’s beyond compare and leave it at that.

I cut the circles out with a small wine glass, and got about 24 after rolling out the scraps of dough. Put about 1 teaspoon of filling on each circle and pinch it closed.  At this point, you can seal the edges by pressing with a fork, but I crimped them like empanadas, just to see if I remembered how.  (This is not a skill I can explain.  My dad taught me sometime in the distant past, and apparently, it’s like riding a bike–you never forget.  But I’m thinking of making some larger empanadas, maybe filled with ham and cheese, to put in the kids’ lunches.  Maybe I can get an assistant to video the process.)
Brush with an egg wash (that’s just a beaten egg, nothing fancy) and bake at 400 degrees for 10-15 minutes.  When they were cool, I did cover and refrigerate them until my evening meeting.  About 15 minutes before I left home, I warmed them up in a 350 degree oven, foil-covered platter and all.  There weren’t any leftovers to bring home from club!  Which is more–or less–than I can say for the healthy spinach dip and veggie platter that I also contributed, thinking a mere 24 appetizers might be insufficient.  I guess nobody really wants celery sticks with wine and Bunco.