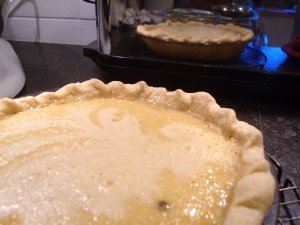 It was Sunday afternoon.  The Chef (not me) had a lovely pork shoulder braising away on the stove top, with baked tomatoes and roasted cauliflower rounding out the menu.  A Sunday dinner deserves a Sunday dessert, right?  Something autumnal, not too fussy.  Something like pie.  I made a couple of batches of dough in the food processor while I thought about filling. 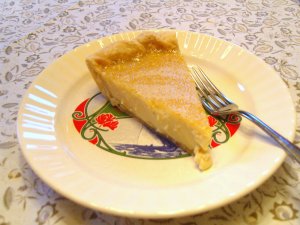 I’ve tried several other recipes for pie crust, some involving vinegar or vodka, and some of these have been spectacular. But they’re fussy.  The recipe I always come back to is 2 1/2 cups of flour, a pinch of salt, 2 sticks of butter and about 6 tablespoons of ice water.  Pulse the flour and salt a couple of times in the food processor.  Slice the butter into chunks and add them to the flour.  Pulse until the butter is in pea-sized lumps (about 20 pulses).  Add the ice water and pulse a few seconds, until the dough starts to stick together.  Dump it all onto a floured counter and squish it into a ball.  Divide the ball in half, press each half into a 6-inch disk, and wrap in plastic wrap.  Refrigerate for at least 30 minutes.  If you’re only making one single-crust pie, put the second disk into a freezer bag and freeze for a rainy day.  I bet that didn’t take 10 minutes, and it’s a million times better than that Pillsbury stuff.

Now, what to put in this pie?  I found two variations on a maple syrup pie, one with eggs and one without.  I chose the Smitten Kitchen recipe, because it seemed less sweet and had more maple syrup.  It did require blind baking the crust, but I left that for the Chef to do while I dashed out for some cream. I didn’t have any freshly ground nutmeg–I haven’t replaced the nutmeg that fell victim to a curious two-year-old in the spice cabinet–so I used 1/4 teaspoon of ground mace.  And I didn’t bother straining the custard, so there were a couple small bits of crystallized syrup in the filling.  Maybe I’d strain it if I were making it for company–or maybe not.

We may rename this recipe Magic Pie, because when I brought it to the table, half of it disappeared in an instant.  Some people ate the custard first, and then the crust.  I looked the other way while plates were being licked.  It’s easier on the dishwasher, you know.  There may have been prolonged begging for seconds, but I cruelly reserved the rest of the creamy maple goodness for Monday’s dessert.
I’m afraid I was too busy being unfussy to take photos of the process.  But for those who are curious, I have that extra disk of dough to turn into something this week, and I promise to document the next one.